The race track…. This is where rocks move – worth seeing, I am told.

We take off after a hurried lunch – 50 miles on a good highway, and then 27 miles on an unpaved track. I’ve never wanted 27 miles to be over so soon; after about 20 minutes my teeth feel like they are ready to drop out. At around 27 mph or less, the bone-jarring ride takes us over an hour.

After what seems an interminable time, we arrive at our destination; a flat dried out lake bed..

Random rocks have apparently slid across the surface leaving tracks rather like slime trails behind them. No-one has seen them move, and not even the geologists can figure out how they do it. It’s a bit eerie seeing these rocks dotted about on the cracked plain, faint trails like snail slime along the plain behind them, often not even in straight lines, but curves or zigs followed by zags. Sometimes two rocks seem to have traveled to each other. Weird. 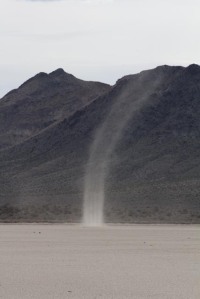 We are also treated by the appearance of a Willy Willy, which as is their wont appears and disappears in minutes.

The country is remarkably varied – one would expect a desert to be uniform, but the vegetation changes every five miles or so; at the start, almost nothing growing, then small dry scrubs, then sprinklings of Joshua trees, fat prickly cacti, and patches of yellow, red or purple spring flowers.

I yearn to see some of the native beasties here – big horn sheep, desert fox or something equally exotic to my antipodean eyes, but apart from one tiny lizard and a few birds, everything else eludes me. 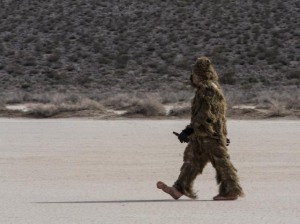 The only beastie that appears is what looks like a yeti with a bottle of beer strolling across the mud flat – maybe Sasquatch has come for a vacation. 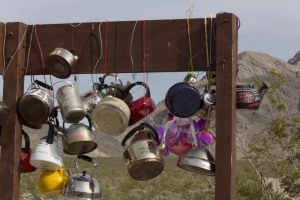 On our return we see a monument to campers which reminds me of the world wide craze for fastening padlocks to the landscape as a testament to undying love. This one entails camp kettles – undying love for tea?

After another hour of bone jarring – we stop to give our teeth a break at the Ubehebe Crater , a massive hole created by a volcanic explosion. The sides of the crater are pretty amazing, and it is lucky we weren’t there when it happened – or we wouldn’t be here… 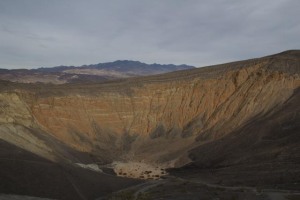 I think we’re rocked out now, and unless tomorrow is a very spectacular day, we will be leaving Furnace Creek and making our way to our next National Park.